Celebrating 18 Years on the World Stage 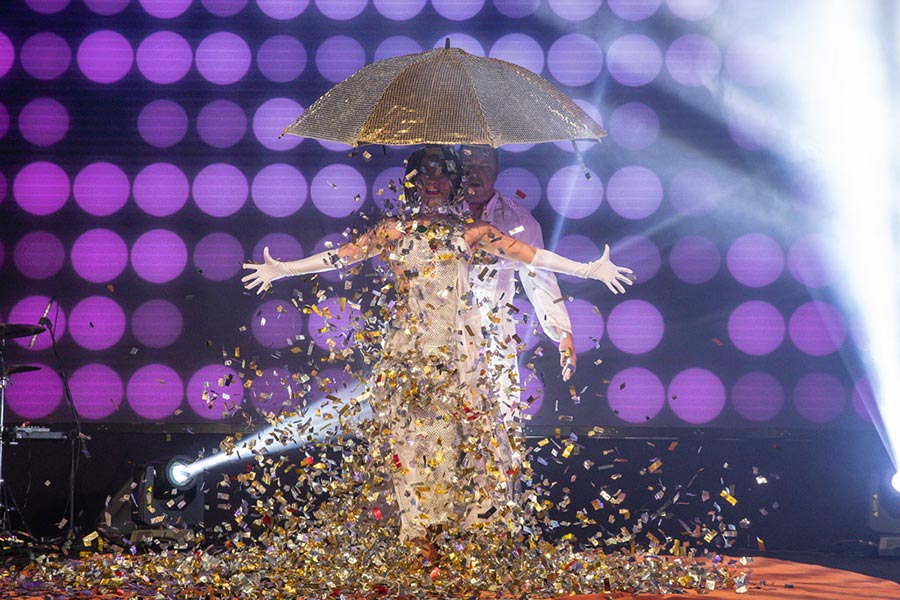 This year marks the 18th anniversary of Gavin and Lydia's partnership on the world stage. Together as Soul Mystique, their stunning performances have captivated and flabbergasted audiences all over the globe, in over 60 countries, from television, live theatre, to high profile corporate events. They have graced the stages of famous theatres such as The London Palladium to Las Vegas, performing next to the likes of John Cleese, Katy Perry, Siegfried & Roy, Human Nature, Jimmy Barnes, Bananarama, The Pretenders, and Maroon 5.

Soul Mystique is also one of the highest sought after acts in Australia and Asia for variety television. This act is most renowned on Australian TV for pushing boundaries & performing world record quick change concepts which brought them fame on the reality TV show ‘Australia’s Got Talent’ (Seasons 1 & 6). Both times, the act was loved and voted through to the Grand Finals by the nation, placing 3rd in Season 6. . They were the only visual act to make the top 3 in the Grand Finals, making international headlines as the most innovative and outstanding quick change act in the world.

Their attention to detail from costuming, prop design, to choreography, has been noticed by other artists worldwide, and they have been approached to co-produce the visual entertainment for artists such as Asia’s A-List celebrity Andy Lau, Cirque Du Soleil, and Producers of Fashion Week New York, London, & Paris.

In world variety theatre, Soul Mystique™ has graced the stages of the most prestigious venues from Las Vegas to London’s West End. They were the closing act in 2008 ‘Variety Live’ in Las Vegas sharing standing ovations with the world’s best in variety theatre. This performance led to an honourable invitation by Siegfried and Roy Tribute show producers to be featured in yet another world variety extravaganza at the London Palladium in September 2008.

In 2012, Soul Mystique was invited to Japan by Nippon TV to produce a dance transformation segment for famous Japanese Comedian ‘Ayoto Imoto’ on Japan’s highest rating family show – ITTEQ. This was an instant hit amongst it’s 16.5 million viewers. In 2013, Germany's most popular TV show, ‘The 25’ head-hunted Soul Mystique to appear in their TV special on some of the world's most Extraordinary Passions. This was aired nationwide across Germany.

When they are not on stage, Gavin and Lydia are fully dedicated to reinventing the art of quick change. They have a full time production studio where they create every element of their shows. Their passion is to deliver beautiful, high impact visual entertainment, and take their audiences away from reality...even for just a moment in time.