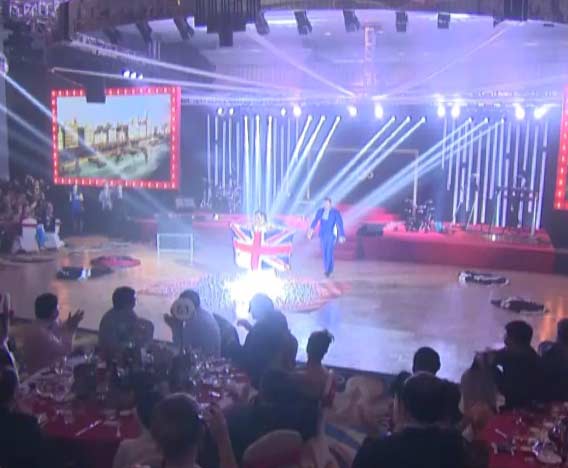 We're excited to share some of our recent projects with you! This year, we have seen more Events going that extra mile to impress their audiences, and customised entertainment has been a big request. Our creators of Soul Mystique – Gavin and Lydia, have not only been producing new and innovative jaw-dropping transformations this year, but they have also been customising shows for these events. From themed costumes, to flag and logo reveals, the sky has been the limit.

Check out some of Soul Mystique’s customised projects this year :

The British Chamber of Commerce Shanghai hosted it’s annual charity ball at the Shangri-la, Pudong. 1000 Chamber members and friends were transported back to 1915 with the theme of old Shanghai, marking the year when British Chamber Shanghai was first established. The client requested for a British themed show, so Gavin and Lydia created transformations with James Bond, Austin Powers, and a confetti finale revealing the Union Jack flag.

‍Business leaders, government officials & organizations from 115 cities around the world attended this event held at the Brisbane City Hall. To welcome such a high profile international audience, cultural costumes were incorporated into the show. Gavin and Lydia created transformations with Chinese, USA, Indian, and latin-american costumes.

‍The biggest and most-awaited event of the year for this global nutrition company was held at the famous IMPACT arena in Bangkok this year. 20,000 people from 13 countries attended this mega event. The theme for their VIP gala dinner was ‘Great Gatsby’. Gavin and Lydia created a Gatsby themed show with tuxedos, and a sparkling gold finale as requested by the client.

‍A sold out event that was attended by Gold Coast SUNS players, and their fans. Soul Mystique was the surprise entertainment, and even more surprising, was when Gavin transformed into a SUNS player, and then back into his white tails suit after. The crowd went nuts!

‍One of Shanghai’s biggest gala events which is held annually to celebrate St Patrick’s Day. Soul Mystique had performed at this event in 2014, and was invited back for an encore appearance this year. Gavin and Lydia created an Irish inspired finale, transforming under green confetti into green evening couture.