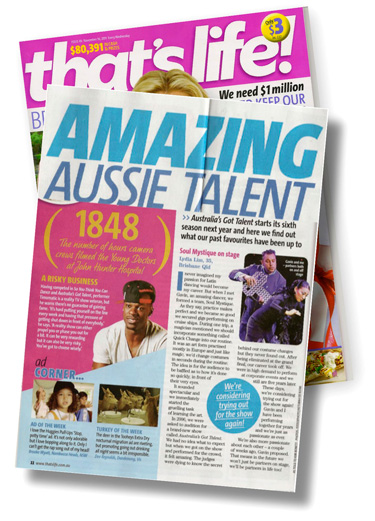 ARTICLE : "I never imagined my passion for Latin dancing would become my career. But when I met Gavin, an amazing dancer, we formed a team, Soul Mystique. As they say, practice makes perfect and we became so good we secured gigs performing on cruise ships.

During one trip, a magician mentioned we should incorporate something called Quick Change into ourroutine. It was an art form practised mostly in Europe and just like magic, we'd change costumes in seconds during the routine. The idea is for the audience to be baffled as to how it's done so quickly, in front of their very eyes.

It sounded spectacular and we immediately started the gruelling task of learning the art. In 2006, we were asked to audition for a brand new show called Australia's Got Talent. We had no idea what to expect but when we got on the show and performed for the crowd, it felt amazing. The judges were dying to know the secret behind our cosume changes but they never found out.

Our career took off after this show. We were in high demand to perform at events all over the globe and we still are five years later...We have been performing together for years and we're just as passionate as ever. A couple of weeks ago, Gavin proposed. That means in the future we won't just be partners on stage, we'll be partners in real life too!"